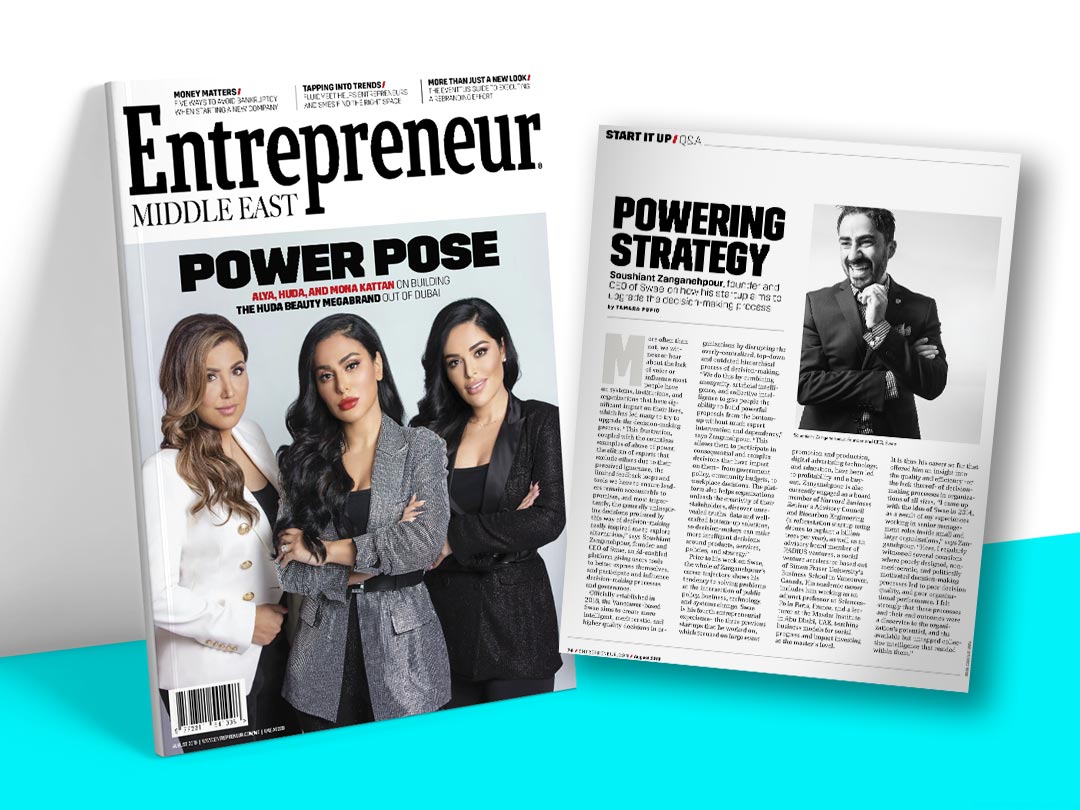 Swae has been featured in Entrepreneur Middle East and Entrepreneur magazine. You can read the full article below: 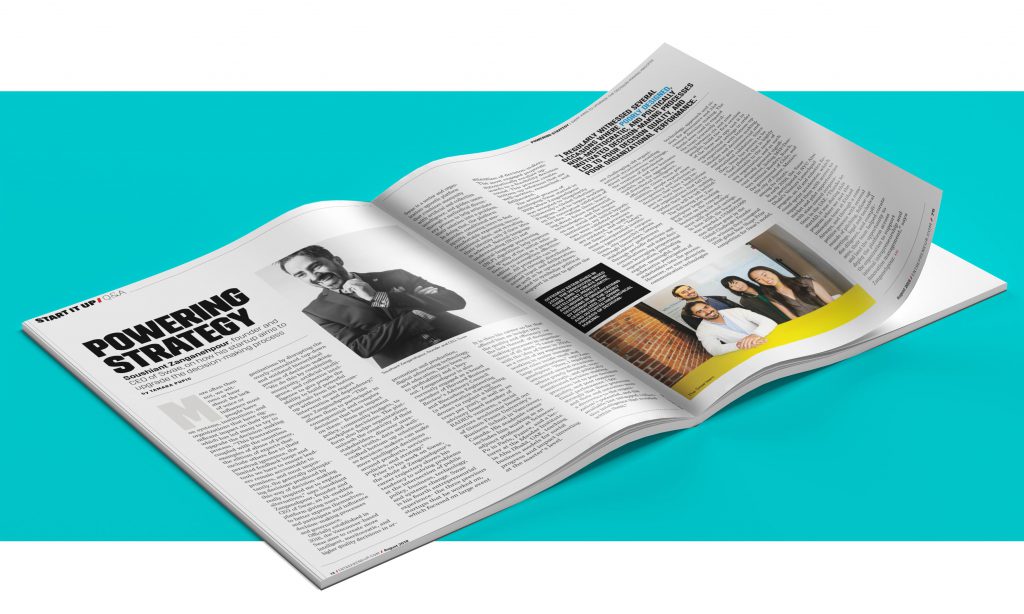 Thank you, Entrepreneur ME, for your interest and coverage of Swae. Swipe to view the pages (4). 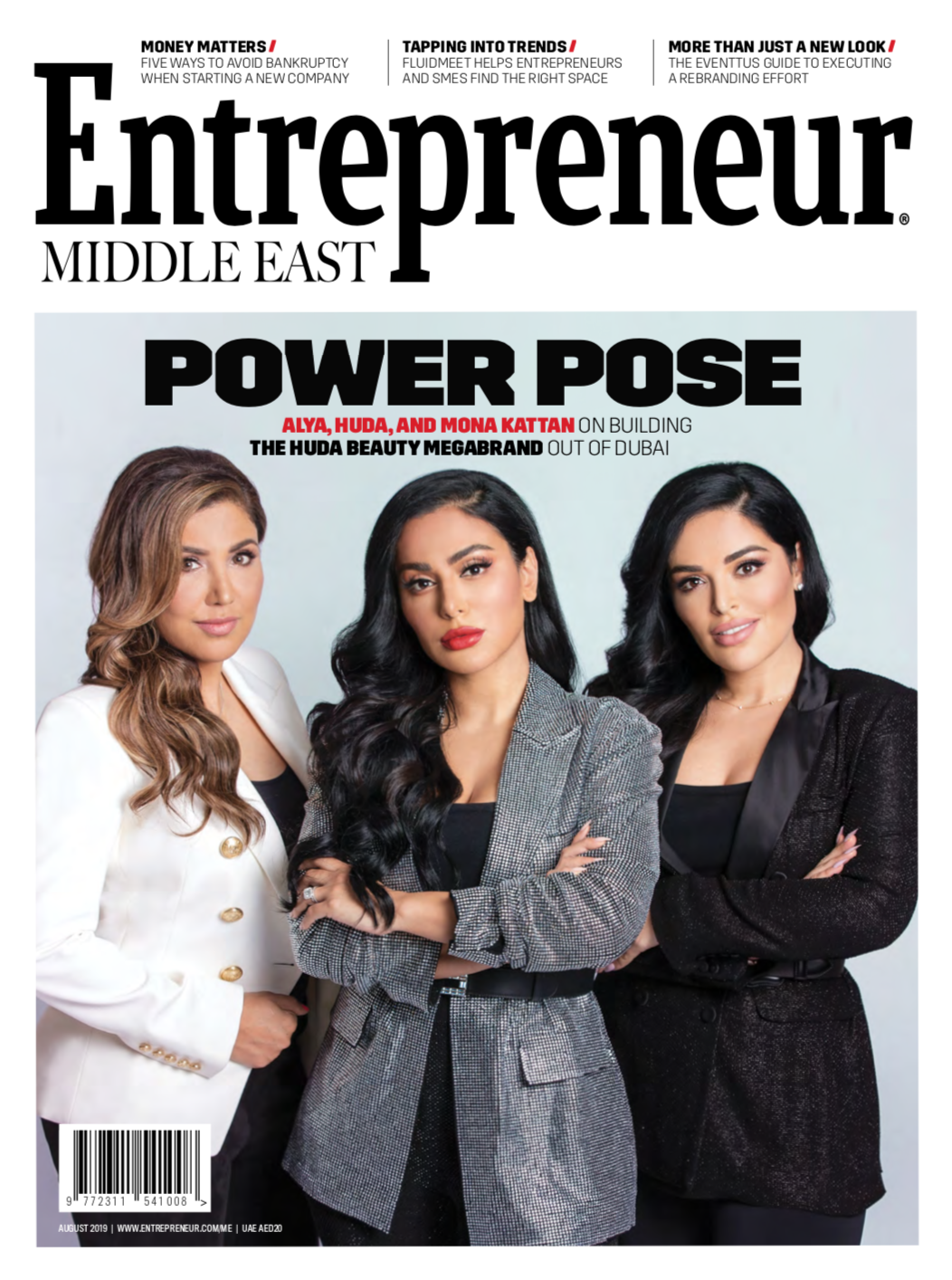 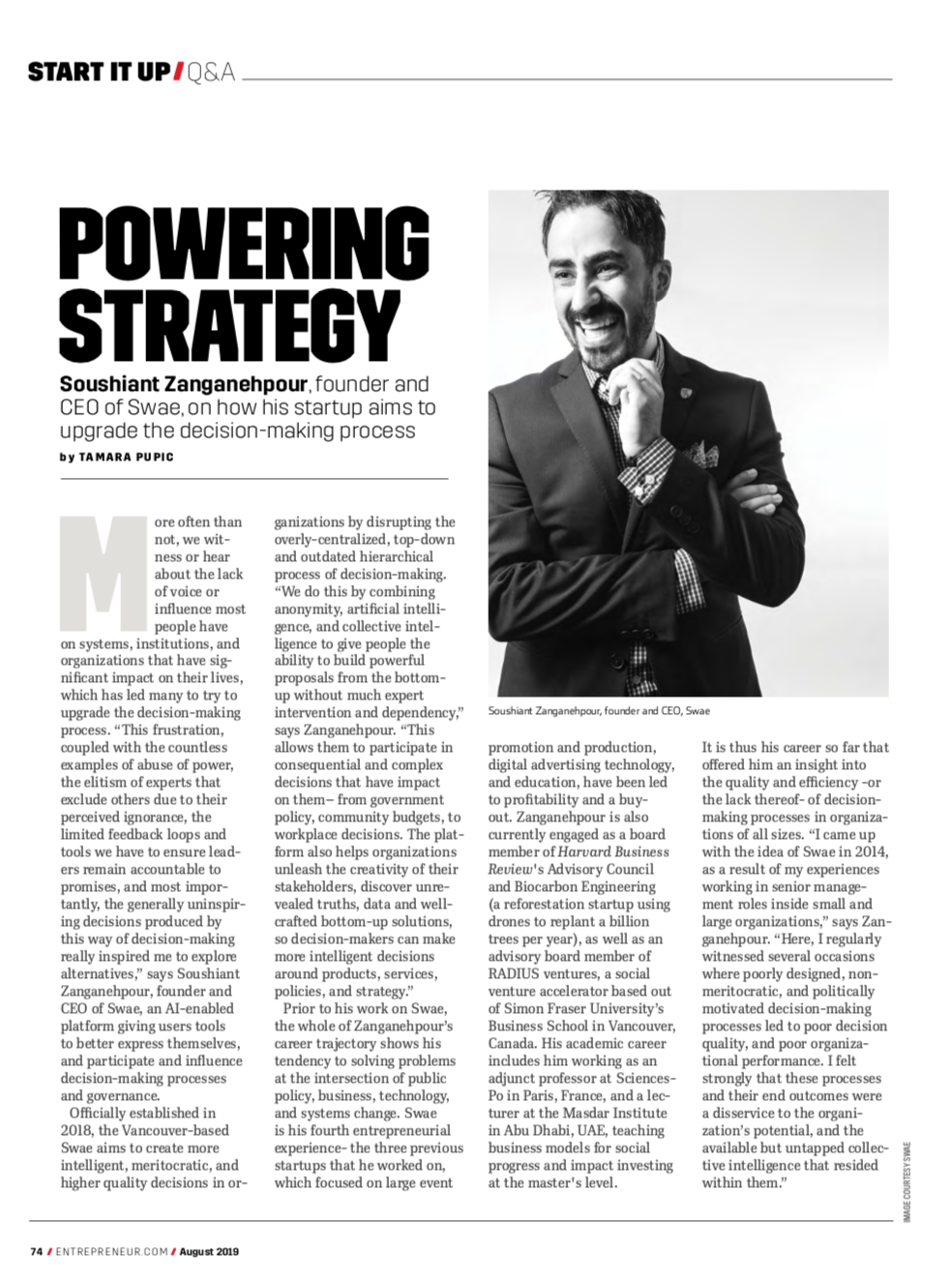 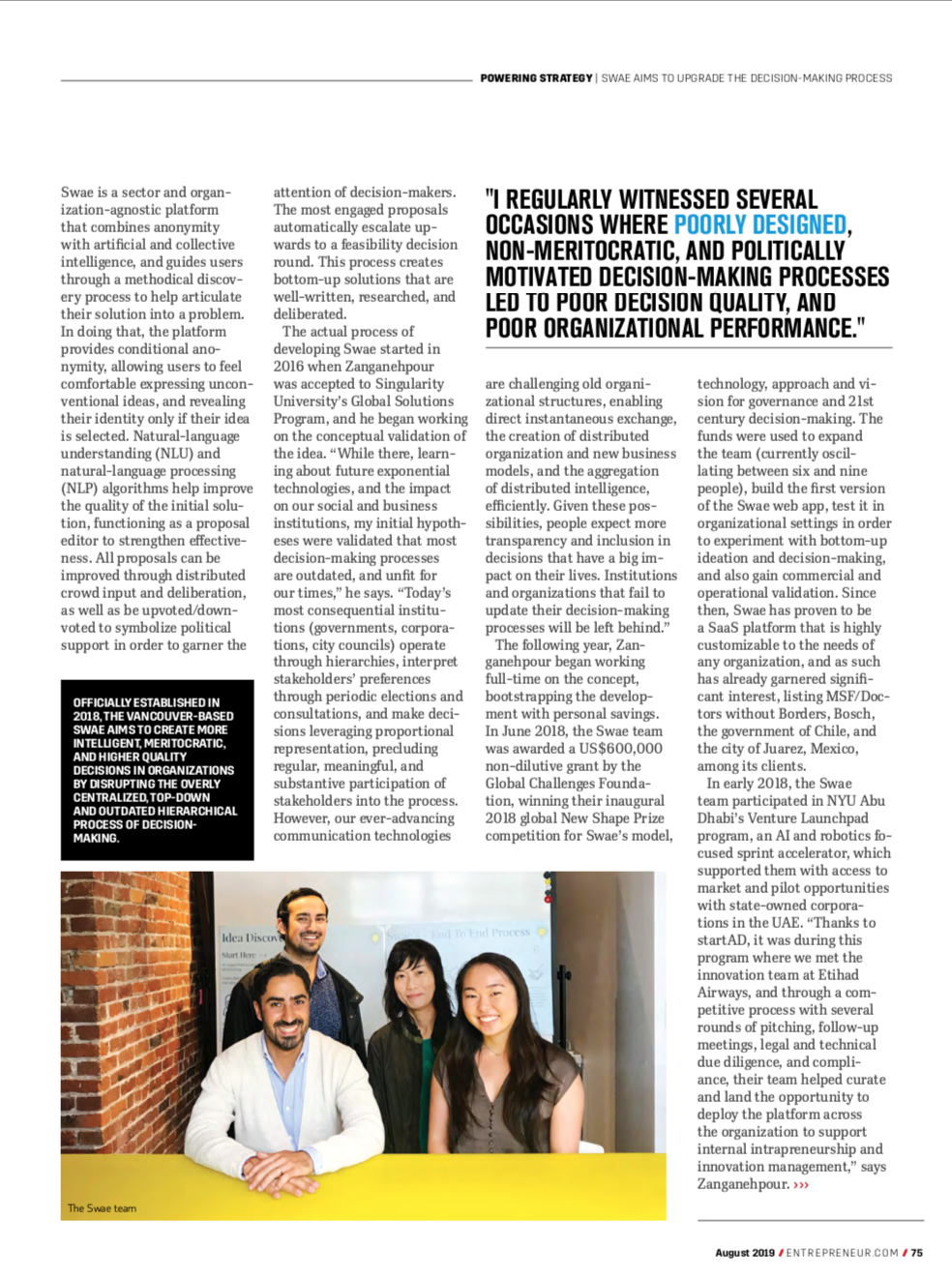 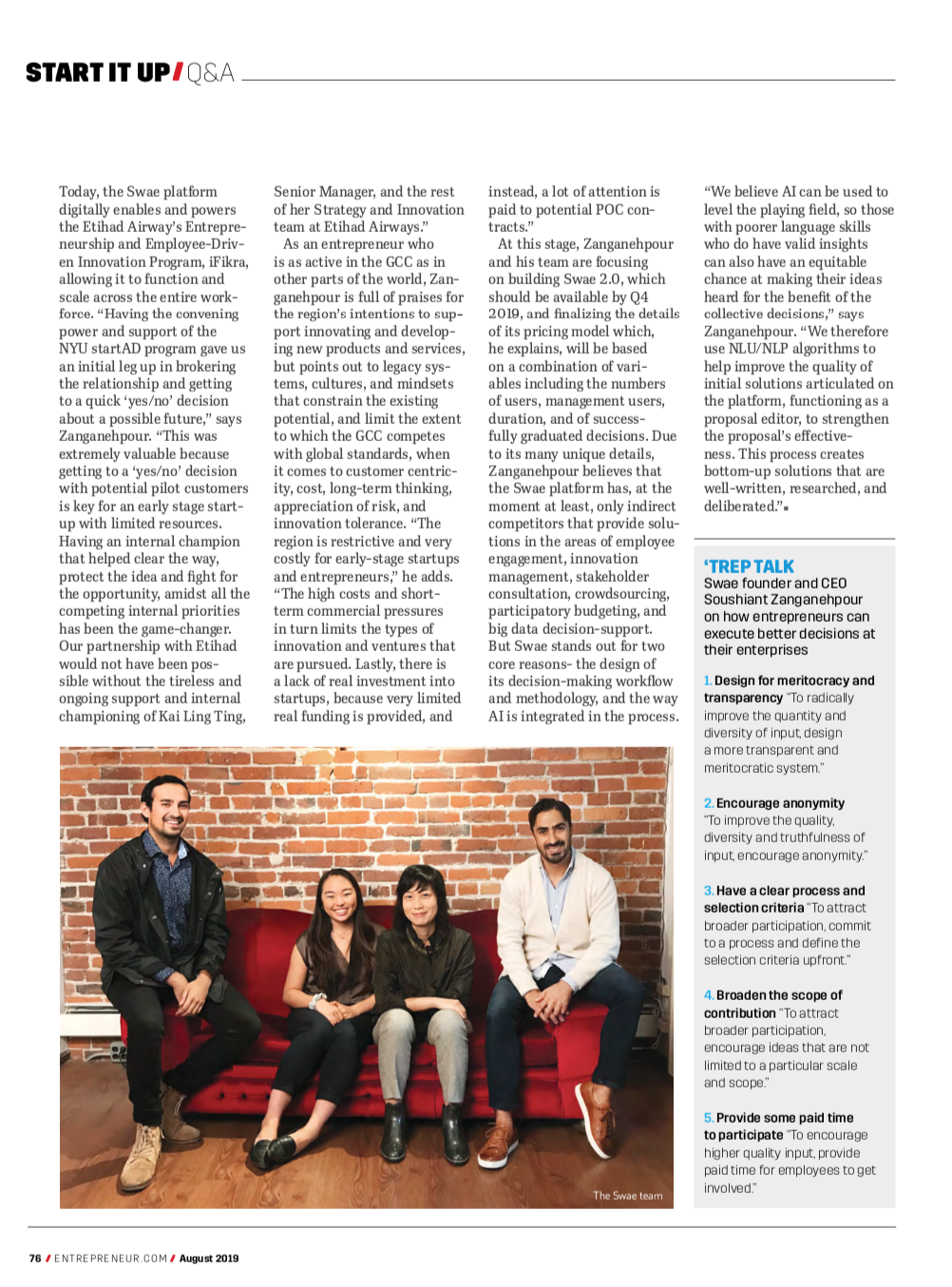 Soushiant Zanganehpour, founder and CEO of Swae, on how his startup aims to upgrade the decision-making process

More often than not, we witness or hear about the lack of voice or influence most people have on systems, institutions, and organizations that have significant impact on their lives, which has led many to try to upgrade the decision-making process. “This frustration, coupled with the countless examples of abuse of power, the elitism of experts that exclude others due to their perceived ignorance, the limited feedback loops and tools we have to ensure leaders remain accountable to promises, and most importantly, the generally uninspiring decisions produced by this way of decision-making really inspired me to explore alternatives,” says Soushiant Zanganehpour, founder and CEO of Swae, an AI-enabled platform giving users tools to better express themselves, and participate and influence decision-making processes and governance.

Officially established in 2018, the Vancouver-based Swae aims to create more intelligent, meritocratic, and higher quality decisions in organizations by disrupting the overly-centralized, top-down and outdated hierarchical process of decision-making. “We do this by combining anonymity, artificial intelligence, and collective intelligence to give people the ability to build powerful proposals from the bottom- up without much expert intervention and dependency,” says Zanganehpour. “This allows them to participate in consequential and complex decisions that have impact on them– from government policy, community budgets, to workplace decisions. The platform also helps organizations unleash the creativity of their stakeholders, discover unrevealed truths, data and well- crafted bottom-up solutions, so decision-makers can make more intelligent decisions around products, services, policies, and strategy.”

Prior to his work on Swae, the whole of Zanganehpour’s career trajectory shows his tendency to solving problems at the intersection of public policy, business, technology, and systems change. Swae is his fourth entrepreneurial experience- the three previous startups that he worked on, which focused on large event promotion and production, digital advertising technology, and education, have been led to profitability and a buy- out. Zanganehpour is also currently engaged as a board member of Harvard Business Review’s Advisory Council and Biocarbon Engineering (a reforestation startup using drones to replant a billion trees per year), as well as an advisory board member of RADIUS ventures, a social venture accelerator based out of Simon Fraser University’s Business School in Vancouver, Canada. His academic career includes him working as an adjunct professor at Sciences- Po in Paris, France, and a lecturer at the Masdar Institute in Abu Dhabi, UAE, teaching business models for social progress and impact investing at the master’s level.

It is thus his career so far that offered him an insight into the quality and efficiency -or the lack thereof- of decision- making processes in organizations of all sizes. “I came up with the idea of Swae in 2014, as a result of my experiences working in senior management roles inside small and large organizations,” says Zanganehpour. “Here, I regularly witnessed several occasions where poorly designed, non-meritocratic, and politically motivated decision-making processes led to poor decision quality, and poor organizational performance. I felt strongly that these processes and their end outcomes were a disservice to the organization’s potential, and the available but untapped collective intelligence that resided within them.”

Swae is a sector and organization-agnostic platform that combines anonymity with artificial and collective intelligence, and guides users through a methodical discovery process to help articulate their solution into a problem. In doing that, the platform provides conditional anonymity, allowing users to feel comfortable expressing unconventional ideas, and revealing their identity only if their idea is selected. Natural-language understanding (NLU) and natural-language processing (NLP) algorithms help improve the quality of the initial solution, functioning as a proposal editor to strengthen effectiveness. All proposals can be improved through distributed crowd input and deliberation, as well as be upvoted/down- voted to symbolize political support in order to garner the attention of decision-makers. The most engaged proposals automatically escalate up- wards to a feasibility decision round. This process creates bottom-up solutions that are well-written, researched, and deliberated.

The actual process of developing Swae started in 2016 when Zanganehpour was accepted to Singularity University’s Global Solutions Program, and he began working on the conceptual validation of the idea. “While there, learning about future exponential technologies, and the impact on our social and business institutions, my initial hypotheses were validated that most decision-making processes are outdated, and unfit for our times,” he says. “Today’s most consequential institutions (governments, corporations, city councils) operate through hierarchies, interpret stakeholders’ preferences through periodic elections and consultations, and make decisions leveraging proportional representation, precluding regular, meaningful, and substantive participation of stakeholders into the process. However, our ever-advancing communication technologies are challenging old organizational structures, enabling direct instantaneous exchange, the creation of distributed organization and new business models, and the aggregation of distributed intelligence, efficiently.

Given these possibilities, people expect more transparency and inclusion in decisions that have a big impact on their lives. Institutions and organizations that fail to update their decision-making processes will be left behind.” The following year, Zanganehpour began working full-time on the concept, bootstrapping the development with personal savings. In June 2018, the Swae team was awarded a US$600,000 non-dilutive grant by the Global Challenges Foundation, winning their inaugural 2018 global New Shape Prize competition for Swae’s model, technology, approach and vision for governance and 21st century decision-making. The funds were used to expand the team (currently oscillating between six and nine people), build the first version of the Swae web app, test it in organizational settings in order to experiment with bottom-up ideation and decision-making, and also gain commercial and operational validation.

Since then, Swae has proven to be a SaaS platform that is highly customizable to the needs of any organization, and as such has already garnered significant interest, listing MSF/Doctors without Borders, Bosch, the government of Chile, and the city of Juarez, Mexico, among its clients. In early 2018, the Swae team participated in NYU Abu Dhabi’s Venture Launchpad program, an AI and robotics focused sprint accelerator, which supported them with access to market and pilot opportunities with state-owned corporations in the UAE.

“Thanks to startAD, it was during this program where we met the innovation team at Etihad Airways, and through a competitive process with several rounds of pitching, follow-up meetings, legal and technical due diligence, and compliance, their team helped curate and land the opportunity to deploy the platform across the organization to support internal intrapreneurship and innovation management,” says Zanganehpour.

Today, the Swae platform digitally enables and powers the Etihad Airway’s Entrepreneurship and Employee-Driven Innovation Program, iFikra, allowing it to function and scale across the entire work- force. “Having the convening power and support of the NYU startAD program gave us an initial leg up in brokering the relationship and getting to a quick ‘yes/no’ decision about a possible future,” says Zanganehpour. “This was extremely valuable because getting to a ‘yes/no’ decision with potential pilot customers is key for an early stage start- up with limited resources. Having an internal champion that helped clear the way, protect the idea and fight for the opportunity, amidst all the competing internal priorities has been the game-changer.

Our partnership with Etihad would not have been possible without the tireless and ongoing support and internal championing of Kai Ling Ting, Senior Manager, and the rest of her Strategy and Innovation team at Etihad Airways.” As an entrepreneur who is as active in the GCC as in other parts of the world, Zanganehpour is full of praises for the region’s intentions to support innovating and developing new products and services, but points out to legacy systems, cultures, and mindsets that constrain the existing potential, and limit the extent to which the GCC competes with global standards, when it comes to customer centricity, cost, long-term thinking, appreciation of risk, and innovation tolerance.

“The region is restrictive and very costly for early-stage startups and entrepreneurs,” he adds. “The high costs and short- term commercial pressures in turn limits the types of innovation and ventures that are pursued. Lastly, there is a lack of real investment into startups, because very limited real funding is provided, and instead, a lot of attention is paid to potential POC contracts.” At this stage, Zanganehpour and his team are focusing on building Swae 2.0, which should be available by Q4 2019, and finalizing the details of its pricing model which, he explains, will be based on a combination of variables including the numbers of users, management users, duration, and of successfully graduated decisions. Due to its many unique details, Zanganehpour believes that the Swae platform has, at the moment at least, only indirect competitors that provide solutions in the areas of employee engagement, innovation management, stakeholder consultation, crowdsourcing, participatory budgeting, and big data decision-support.

But Swae stands out for two core reasons- the design of its decision-making workflow and methodology, and the way AI is integrated in the process. “We believe AI can be used to level the playing field, so those with poorer language skills who do have valid insights can also have an equitable chance at making their ideas heard for the benefit of the collective decisions,” says Zanganehpour. “We therefore use NLU/NLP algorithms to help improve the quality of initial solutions articulated on the platform, functioning as a proposal editor, to strengthen the proposal’s effectiveness. This process creates bottom-up solutions that are well-written, researched, and deliberated.”

Swae founder and CEO Soushiant Zanganehpour on how entrepreneurs can execute better decisions at their enterprises: 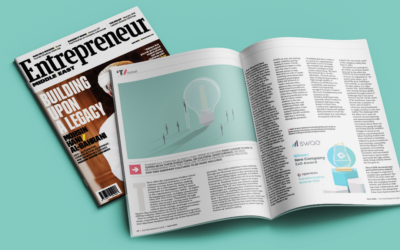 Entrepreneur Mag: A deep dive into the ups and downs of building a tech startup in uncertain times

Swae: A roller coaster rideA deep dive into the ups and downs of building a... 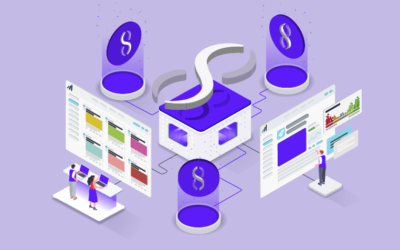 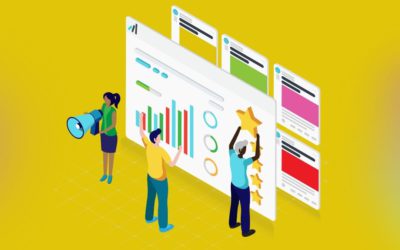 The Results Are In [Why Investing in Swae Pays Off]

The Results Are In [Here's Why Investing in Swae Pays Off]Swae Boosts...